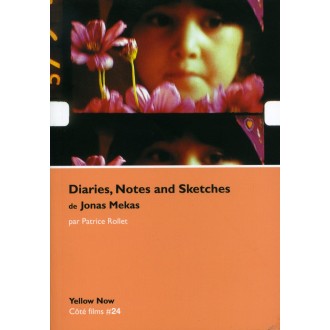 A book about the work of Jonas Mekas by Patrice Rollet.

In 1949 , when he arrived in New York with his brother Adolfas after fleeing his native Lithuania, experienced forced labor camps and displaced persons in Germany in the immediate post -war people , until 2012 when he rises out-Takes from the life of a Happy Man before the fade forever his last film falls , Jonas Mekas filmed his life : first years of exile and the slums of Brooklyn in Lost Lost Lost, then those , legendary birth of underground cinema, Fluxus and pop culture in Walden , Scenes from the Life of Andy Warhol, Zefiro Torna or Happy Birthday to John , finally those more intimate , friendship and of love in As I Was Moving Ahead Occasionally I Saw Brief Glimpses of Beauty. [ ... ]

[ ...] On a paradise to another, the lost childhood that found film and poetry, Mekas , according to him, has continued to turn a single film during more half a century , which he gave as a moment when it became aware , Diaries , Notes and Sketches . Beyond the apparent diversity of works , this little book strives to place this thread , thin but continuous , even having to face huge work in progress which has just ended , with the band for some but also grips for many of them , copies of the new Odyssey.