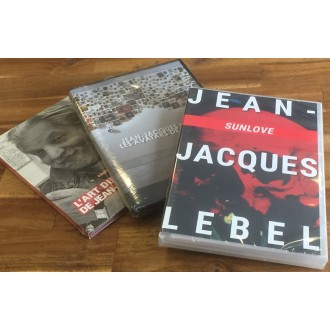 3 DVD pack with films by and featuring Jean-Jacques Lebel at a special promotional price.

The process leading to the making of the film-installation Les Avatars de Vénus goes back thirty years to the thousands of images I began picking up – from news stands, bookshops, libraries, museums, flea markets as I travelled around the world, drawing, photographing, analyzing, filming and remembering what I saw. Finally, I collected a giant image–bank of different incarnations of Venus spreading across time and space, coming from all continents, all civilizations, all epochs, respecting the logic of each one of them, regardless of the arbitrary ideological hierarchy established by academicians between High Art and Low Art. I chose to mix art history and popular imagery, Renaissance iconography and commercial advertisements, religious propaganda and common pornographic icons, movie stars and classical as well as non-occidental sculpture, all fetishes being complementary.
- Jean-Jacques Lebel

L'art du mont(r)age de Jean-Jacques Lebel
In 2009, La Maison Rouge presented an exhibition of a new kind : Soulèvements (Uprisings), dedicated to Jean-Jacques Lebel and curated by Jean de Loisy. A giant and protean installation tackling the principal axis of the visual, poetic and political activities of this extraordinary artist, a polyglot and practitioner of rhizome.

Explorer of miscellaneous worlds, conceiver of happenings, organizer of collective and transcultural events, partisan of the universalized Dadaisation, destroyer of boundaries of all kind, leading figure to a young generation of artists, this DVD deploys all his facets.

Directed by Danielle Schirman and starring congenial friends, the film witnesses of an undertaking that is rare due to its interdisciplinarity and libertarian request.

SUNLOVE
In the 1950s, Jean-Jacques Lebel (born 1936) began to develop an unclassifiable artistic practice, which his friend Felix Guattari described as "painting transversality". Lebel was an artist and an activist, an instigator of happenings and organizer of events, a writer and publisher - he's one of the most important cultural transmitters of the second half of the 20th century.
-Alexandre Mare, Art Press

The happenings that myself and my friends organized in Europe in the years before May 1968 were, unlike those of our colleagues across the Atlantic, directed against the moral order, the dictatorship of commodities, against all self- censorship in matters of sex and politics. We turned our back on the art market and on all academia, even "activist" academia. We wanted to say and do something else, in some other way. And we did it.
-Jean-Jacques Lebel

In December 1967, the International Experimental Film Festival of Knokke-le-Zoute - EXPRMNTL 4 – created by Jacques Ledoux was a unique experience. Combining films, performances and panel discussions, it was soon transformed by waves of dissent, demonstrations and debate, culminating in a spontaneous happening by Jean-Jacques Lebel. Rare film documents by Claudia von Alemann and Jud Yalkut shed valuable light on the energized atmosphere of these rowdy events, just months before May ’68.