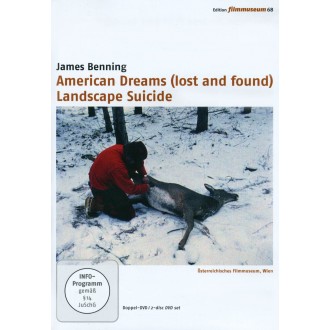 For 40 years, James Benning has been a singular, defiant voice in the American independent film scene. This 2-disc set the first in a planned series devoted to the filmmaker's oeuvre features two of Benning's seminal works from the mid-1980s for the first time ever on DVD: American Dreams (lost and found) is the filmmaker's personal take on the history of the USA from 1954 to 1976, told through a complex and thought provoking amalgamation of image, text and sound. In Landscape Suicide, he effortlessly strides the boundaries of narrative and documentary forms as he recounts two infamous murder cases that took place almost 30 years apart.

Includes a 20 page booklet on the films.