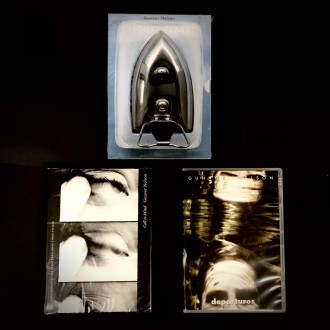 Pack of 3 Gunvor Nelson DVDs at a special promo price

DEPARTURES
"I discovered how beautiful things look through the camera... A melon or dirty dishes, seen with a lens in close-up were translated into something else... The camera became like binoculars; you zero in on a small area and isolate it, and it becomes more precious because it's selected." (Holmlund, 78)

LIGHT YEARS
The Swedish-American artist Gunvor Nelson figures among the most important experimental filmmakers of her generation. Her work considerably influenced the New American Cinema at the end of the 1960s, as much by its themes (women, the body, memory, dreams) as by its formal investigations (animation, collage, found footage).

The films and the essay contained in this box set reflect a half-century of evolution in media and technique. From her first experimental films made in California to her more recent Swedish films and video, material fictions joyously exalt in a fireworks of sensations.

Includes a 124-page book of interviews and critical articles by Julie Savelli, lecturer in film studies at the University of Montpellier 3. Her research focuses on creative consciousness and more specifically on the evolution of the documentary act.

“The films of Gunvor Nelson are saturated with a restless, offhand elegance.”
-James Irwin

“I have made both surrealistic and expressionistic films, but I prefer the term ‘personal film.’ That is what it is about.”
-Gunvor Nelson

CALL TO MIND
“Call to Mind” contains the films MY NAME IS OONA (1969), TIME BEING (1991) and RED SHIFT (1984), a trilogy with the family as a theme. TRUE TO LIFE (2006) functions as a separate comment on the other films. The Blu-ray box includes a catalog with texts by Astrid Soderbergh Widding, Susanne Forest, Steve Anker and John Sundholm, in Swedish and English, as well as a large number of still images.

Gunvor Nelson's work has been exhibited at the Moderna Museet in Stockholm, the MoMA in New York and Cinematek worldwide among other places. Now Filmform has made a selection of her films available on Blu-ray. Nelson who over the years has created some thirty films and video works ranging from 1953 and 1993, primarily in California but currently lives and works in her native town of Kristinehamn.

“Gunvor Nelson has always dug where she stood. Attentive, responsive, determined, curious and with a great sense of humor. The films have followed her as a person as she films. Over the years, there is an ever-growing frustration over the fragility and transience of film as a material. Celluloid is anything but a mass-producible and automatically copyable medium. Thus, the increased demand for her work in this Blu-ray edition is most welcome.”
-John Sundholm