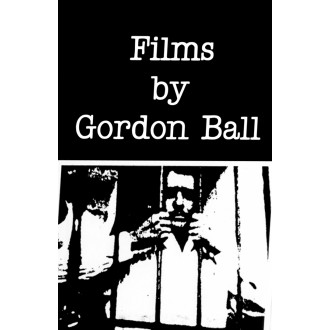 This anthology selects seven works and includes an interview with Gordon Ball by filmmaker and archivist Tom Whiteside.

Gordon Ball's films have been acclaimed for their originality, their powerful directness. As filmmaker Stan Brakhage has written of Ball's two works on the death of his mother and the death of his father, he "has accomplished something unique in the autobiographical genre of motion pictures". Jonas Mekas declared Ball's Mexican Jail Footage "the best jail film I've seen"; of the same movie Robert Frank exclaimed "I can’’t forget this film."

A work by Ball eschews technical polish in favor of "technical sincerity"; it may be made, in part, on the run, as with Father Movie; it may be, as with his first work, Georgia, shot completely spontaneously. It is, as the filmmaker has written, "negligent of all but its own earnest rhythmic awareness... what one person and no other can give us." It is uncompromising and full of heart, strong enough to make one, as poet Allen Ginsberg has written of Ball’s Enthusiasm, "cry for life itself."