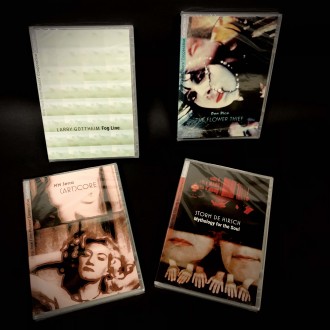 Larry Gottheim - Fog Line
Perfect works have a way of appearing unobtrusive or simple, the complexities seeming to be so correct that they flow—mesmerize one through their form—a form that bespeaks of harmony between many aesthetic concerns. Larry Gottheim's Doorway is such a film. His concern for working with edges, isolating details, the prominence of the frame as a shape and revealer of edges, love of photographic texture, are all dealt with lucidly in this film. One is drawn into these beautiful images through Gottheim's poetic feel for photographic qualities, his ability to transform a landscape through his rigorous use of the frame to isolate in order to call attention to a heretofore hidden beauty revealed through a highly selective eye.
-Barry Gerson, Film Culture

Elegant yet rustic in its simplicity of execution, Barn Rushes is tugged gently toward different sides of the set by hints of color and motion interactions, positive and negative spaces and the unyielding delivery on one of the great apotheoses of poetic cinema at fade-out time.
-Tony Conrad

Fog Line is a wonderful piece of conceptual art, a stroke along that careful line between wit and wisdom—a melody in which literally every frame is different from every preceding frame (since the fog is always lifting) and the various elements of the composition—trees, animals, vegetation, sky, and, quite importantly, the emulsion, the grain of the film itself— continue to play off one another as do notes in a musical composition. The quality of the light—the tonality of the image itself—adds immeasurably to the mystery and excitement as the work unfolds, the fog lifting, the film running through the gate, the composition static yet the frame itself fluid, dynamic, magnificently kinetic
-Raymond Foery

Storm De Hirsch - Mythology for the Soul
A major work in terms of style, structure, graphic invention, image manipulation and symbolic ritual. Short abbreviated dream-like moments, fused together by the tension and the dynamic of motion-picture time.
-Stan Vanderbeek

A further exploration into the color of ritual, the color of thought; a journey through the underworld of sensory derangement. A very beautiful work! The abstractions drawn directly on film are like the paintings of Miro; moving at full speed to the rhythm of an African beat.
-Dominique Noguez

Dedicated to all the magic makers of the world who weave a talisman for man's rebirth in his house of breath.
-Storm De Hirsch
FILMS

Please please show this film! It's unique, it's real, it's not like any other film. What one sees in it, can not be seen anywhere else. It will shock some, but the fact is that there are shocking things in this world and we should know it and see it, nothing human should be hidden from knowledge. You made a very REAL film about REAL people. One of the most difficult things to do in cinema. I congratulate you.
-Jonas Mekas on Chop Off

Her cinema is marked by a lush sensuality, a concern for light, play and artfully woven soundtrack.
-Barbara Hammer

Ron Rice - The Flower Thief
'The Flower Thief', filmed and acted by New York and San Francisco "beats," is a collection of improvisations. Ron Rice, the film's creator, attempted to ignore or break all the rules of cinema craft in making this film. Its form is the picaresque novel, a genre dating from the Middle Ages in which a rogue has a series of loosely connected adventures which reveal his personality and his relations to the world around him. Don Quixote in the Renaissance, Huckleberry Finn in the nineteenth century, and the tramp of Charlie Chaplin in our own times are picaresque heroes. Ron Rice's contribution to this tradition is his flower thief, a mad, harmless homosexual. Wandering through the streets of San Francisco with his teddy bear, indifferent to authority, stealing flowers because he likes them, and experiencing the basic human emotions, he is also The Noble Savage.
-P. Adams Sitney, Film Culture

Taylor Mead - Home Movies
Years ago, when we asked Jonas Mekas what films we should publish next on DVD, he said without hesitation, "Taylor Mead's home movies." That should be reason enough to be curious. Mead is known as an actor, clown and improviser, "the first underground movie star", but his own films are rarely screened. Blending documentation of the NY underground, snippets of Mead clowning, Mead's own percussive style of shooting and the humor in his gaze makes these films a valuable glimpse into and product of mid-1960s underground New York culture - in stunning Kodachrome.
- Pip Chodorov, Re:voir