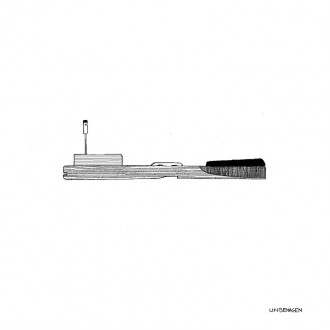 CD with music by the experimental music duo Unbehagen

UNBEHAGEN (engl. unease) explores new forms of domination and exclusion in society using sound environments, they are famous for the use of prepared instruments, extended piano and new acoustic sound devices like the motorized hurdy gurdies that emulate voices, sirens and warfare sounds.

Inspired by the French spectral music but also from traditional music like the shaman singing from East-Siberia and Nord-America, we’ve found a common compositional language, oscillating between written and improvisational forms. The three “Stratagème” pieces are inspired by Juliette Volcler’s essay “Le son comme arme” about the worldwide use of acoustic weapons and devices for warfare and social control. “Musical Banks”, which has been broadcasted on Deutschlandradio Kultur and was primed with the Shut up and listen award in Vienna, stems around Samuel Butler’s utopia “Erewhon” (1872) describing the global financial system as a new religion.

All tracks on CD A were created in studio except Stratagème #3, which was recorded in a residency in collaboration with Léo Maurel at the church of Dangolsheim. CD B contains a 37 minutes long live piece, which has been recorded professionally in one timeline during a concert in Paris this year with the participation of Adrien Daoud on the saxophone.

While the sun is dying behind the horizon a boy is sent alone into a deep forest at night. He is scared, he is surrounded by unknown roaring sounds soon turning into a shrill buzzing and a whirring sound ; he regards them as ancestral or spiritual voices not knowing which is protective or menacing. Though he is aware about this being a ritual he has to overcome his fears in order for things once kept secret to be revealed to him, that which was sacred to become mundane. Only then shall he be initiated thus leaving behind the boy he once was the night before. Few mysteries, few rituals, are eternal.

One can either listen to Unbehagen (malaise, discomfort, alert… or monkey on a shoulder) as a similar ritual where play transforms sacred into a “topsy-turvy sacred” or just take it as a sonic investigation into secularised rituals, however remote even in the most profane forms. In Unbehagen bull-roarers and hurgy-toys as divination instruments or tools are probably what captures best the potency of the sacred act in this ambiguous relation between play and ritual which can also include today’s use of sonic warfare as a form of social control.

The texture of our daily experiences has become a very complex combination between hard science, technology and art forms. Unless initiated, we are seldom aware of what lies behind the multiple high-tech applications that organise our everyday lives; a prosthetic environment we now have to adapt to after having had adjusted the primal environment to our modern needs.

But how did someone discover that tying a string through a hole in the end of a piece of wood and swinging it around, would produce a sound?