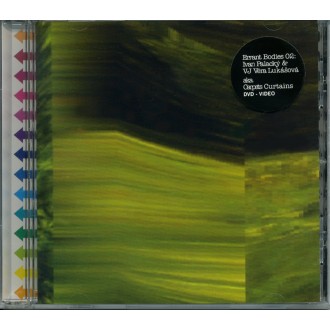 Combining live audio “micro-improvisations” (refined by musician Ivan Palacky) with live video manipulations (by video and VJ-artist Filip Cenek aka VJ Vera Lukasova), Carpets Curtains express an engaging and nuanced interplay of audio and visual material. With live visuals being mostly based on self-made video sequences in which emphasis is placed on ambiguous "narration" whilst VJ software-mistakes are used to reach new amoebic image qualities, the result is a principle or method of remaining fixed to moving images while vacating the essential aspects for building concrete meaning. Such visual approaches find parallel in Palacky’s delicate musicalities, in which found objects and minimal electronics are fused to create elegantly small sound mixtures.

Ivan Palacky has (in the 80s and the beginning of the 90s) played with various groups and taken part in several music projects. He was a member of the guitar/doublebass/bassoon group "Slede, zive slede" (Herring, live herring) – and currently performes in a duo called "Tilko" (Singlet) and audiovisual project Koberce, zaclony (Carpets, Curtains). He "writes" a sound diary from all his journeys – collects excerpts of stories, weird sounds and various "acoustic mistakes". He likes to take part in one-shot improvisational groups or duos (with Cremaster, Ruth Barberán and Margarida Garcia, Will Guthrie, Andrea Neumann...) as well as playing solo performances. Since 2005 his main interest has been to "dig out" sounds from an amplified Dopleta 160 knitting machine from the 70s.

Filip Cenek (born 1976 in Jesenik, Czech Rep.) is educated projectionist, graduated from the Faculty of Fine Arts Brno, Video Studio (Keiko Sei), where he currently teaches. From 2004 he has been a postgraduate student at the FAMU Centre of Audiovisual Studies in Prague. He is the co-author (predominantly with Jiri Havlicek) of several short films and animations presented at various fine art exhibitions and experimental film festivals (Centre Pompidou, Paris; L'immagine leggera, Palermo; EMAF, Osnabruck; Wardrobe, Leeds; Parker`s Box, New York; MNAC, Bucurest; among others). He is represented in the National Gallery Collection of Modern and Contemporary Art in Prague. He was awarded the Developmental Grant of Tranzit for his work in the field of visual media last year which allowed him to realize "Carpets Curtains" DVD-Video disk, documenting his cooperation with musician Ivan Palacky.