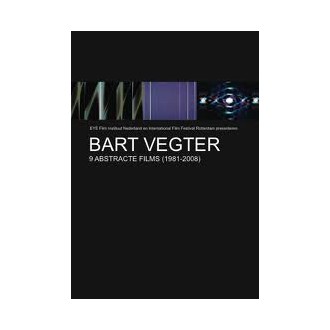 Bart Vegter (1940-2011) was self-taught and derived his primary inspiration from the methods of filmmakers such as Frans Zwartjes and Paul de Mol, and experimental cinema from the 1970s and 1980s. Before starting to shoot abstract films at age forty, Bart Vegter graduated from the Eindhoven University of Technology and worked at the laboratories of Shell and Philips. His oeuvre may be modest in size, but it excels in its eye for detail and craftsmanship. During the early years, he worked with traditional animation techniques. However, his last few films such as 'Nacht-Licht' [Night Light], 'Space-Modulation' and 'Forest-Views' display a more idiosyncratic style attributable to the software he wrote.

This DVD was compiled by the International Film Festival Rotterdam and EYE Film Institute Netherlands and consists of the following films:

HORIZONTALEN (Horizontals)
1981, 6', n/b, silencieux
The film is a superimposition of 6 to 8 takes. In each take, a horizontal piece of white paper was moved around in front of the camera by hand.

IN NEED OF SPACE
1982, 5', couleur, silencieux
Inspired by Steve Reich’s music, a cube rotates with the same dimensions as the film frame.

DE HEMEL IS VIERKANT (Heaven Is Square)
1985, 10', couleur
Compositions of planes, which originate from cross-sections of a cube, parallel to its three main axes.

FOUR MOVES
1987, 7', couleur
Cut-out animation consisting of four parts, each of which depicts its own abstract variation on the themes of colour and movement.

NACHT-LICHT (Night Light)
1993, 13', couleur
The first film Vegter made using image generation software that he wrote himself, consists of three parts, each with its own, formal starting-point. Gradual changes in the position, direction, movement, velocity and colour of the elements become apparent.

SPACE-MODULATION
1994, 1', couleur, silencieux
A black plane with a large number of tiny dots gradually changes from flat to spatial to capture an image which is neither flat nor spatial.